While exploring options for a low power shared network storage for home use, I’ve considered using components already available to me: a TP-Link N750 router and an USB HDD as a lightweight NAS. I’ve decided to run some performance benchmarks on a test setup to assess the viability of it for everyday use.

The OpenWRT wiki mentions that one should not expect much performance from such systems as it can be seen from measurements done on a RouterStationPro:

Above bandwidths mean that potentially this setup could be enough for only simple use cases like:

Note the emphasis is on incremental storage and general data access. Managing photos, editing video or doing anything more IO intensive would still have to be done locally on the laptop.

First the USB disk for storing content needed to be prepared. I formatted it as a single partition using the ext4 file system.

Now the router had to be set up to make the disk available over the network. For this I logged into router over SSH and then commenced to install USB essential modules.

After that I installed USB storage drivers. Note that some packages will be pulled in automatically, namely kmod-scsi-core, kmod-crypto-hash, and kmod-lib-crc16.

At this point the drive should show up after plugging it into the router.

To use the drive it needs to be mounted and a publicly read-writeable directory created.

To make it accessible via network I chose to use NFS as it’s almost universally supported by all Linux distributions, Windows 8 and above, and MacOS X too. To have NFS service additional packages needed to be installed.

Finally the exact share had to be configured and the NFS server started.

To change the block size for the NFS server the service has to be stopped and the new value written to the mounted nfsd proc tree before starting the NFS service again.

I needed to enable NFS support in the kernel first:

After recompiling the kernel I was ready to mount the router’s NFS share. To make testing more convenient I’ve added a line to /etc/fstab

and started the NFS client before mounting the NFS share.

In order to make my tests representative of the most generic use cases I’ve prepared a sample data set on my local host. Since viewing photos is similar to reading documents, as they are about the same size, I did not do a separate test for documents access specifically.

Where Pictures contained a set of 6MP photos in JPG format, Movies had the Big Buck Bunny 1080p test video, Music contained a grabbed copy of an album from one of my CD-s in FLAC format, and linux-4.9.0 was a copy of a kernel source directory.

The following operations were benchmarked:

Above measurements were made with different NFS options (only mount options that have changed are mentioned here):

For details on these options see man pages nfs(5), exports(5) and mount(8).

Between the async and sync tests the remote storage was wiped and the router restarted. Setting async on the client side made no sense, as the client can easily cache all the content in memory and return with success immediately, while writing data in the background and thus providing us with non realistic numbers on the network speeds.

To get transfer statistics I’ve used rsync with the following flags:

To measure CPU usage on the router I’ve used the top command as well as the load graphs provided by the LuCI interface. No load measurements were made on the client side as the router is the clear bottleneck from the point of view of this setup.

To always force all IO to happen, before every measurement I’ve dropped all the caches both on the client machine and the router using the following command:

On the client side the data was stored in tmpfs. Additionally I made sure there is no other network traffic going through the router to get the best case performance numbers out of the setup.

Finally when streaming I only evaluated whether the audio and video files play flawlessly, without interruption, while for photos I tried whether viewing them as a slide show works reasonably well.

Data transfer rates for server/client settings with block size of 16384.

Data transfer rates for server/client settings with block size of 32768.

The following table shows typical CPU load obtained from top on the router under different scenarios.

I’ve also selected a few load graphs, which are a representative set for the CPU load on the router during the data transfers. 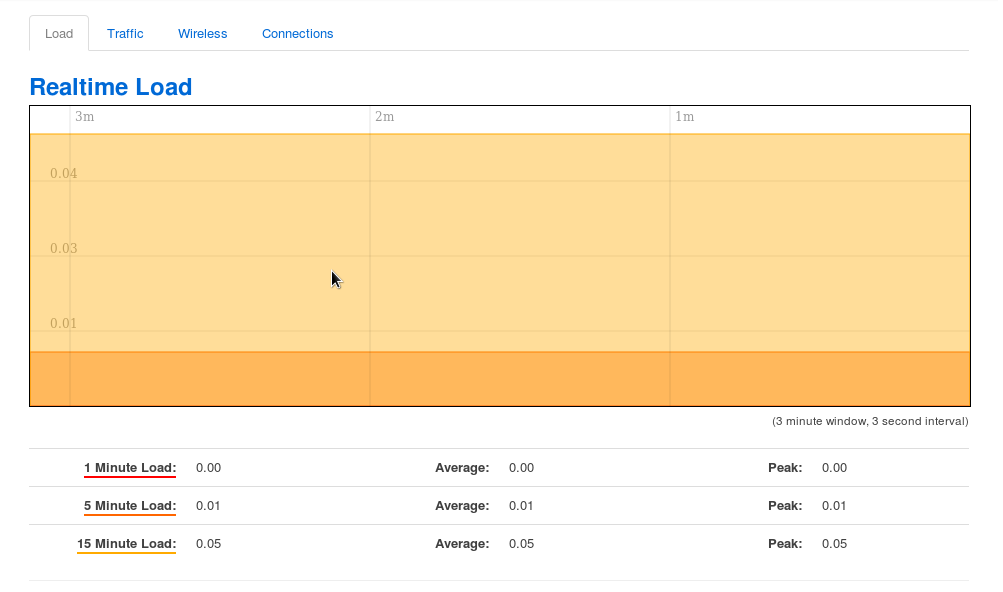 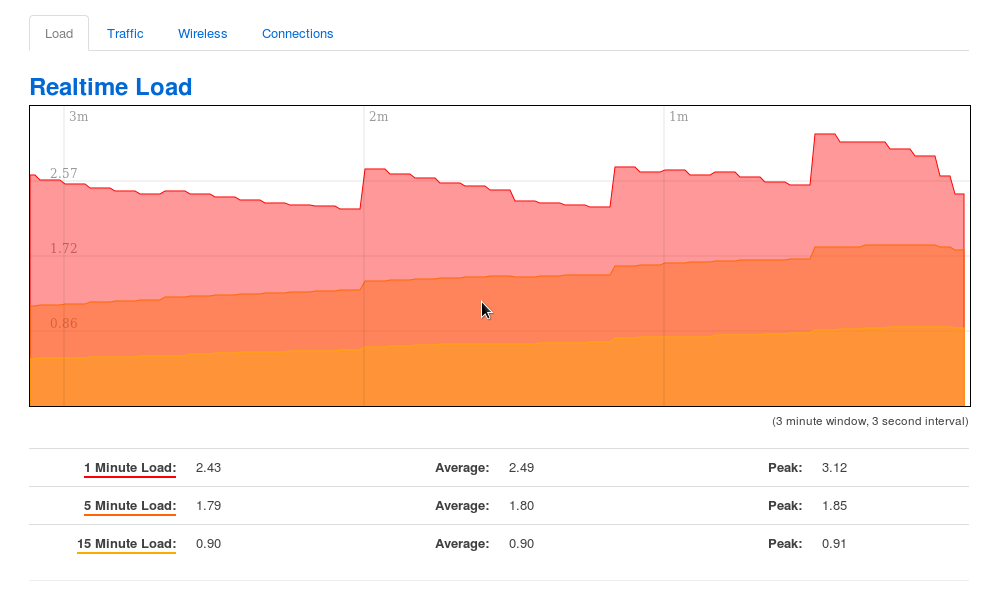 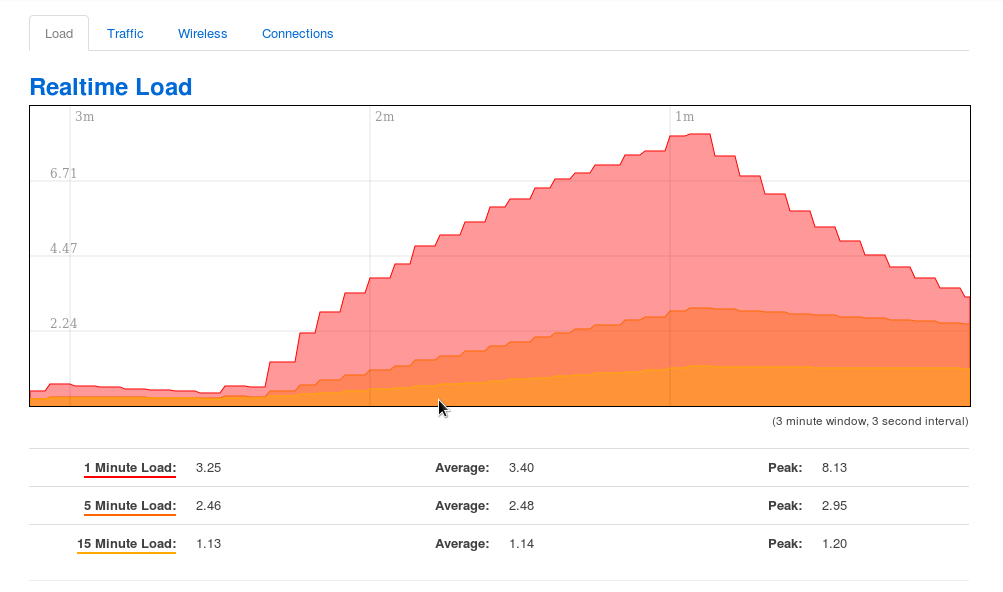 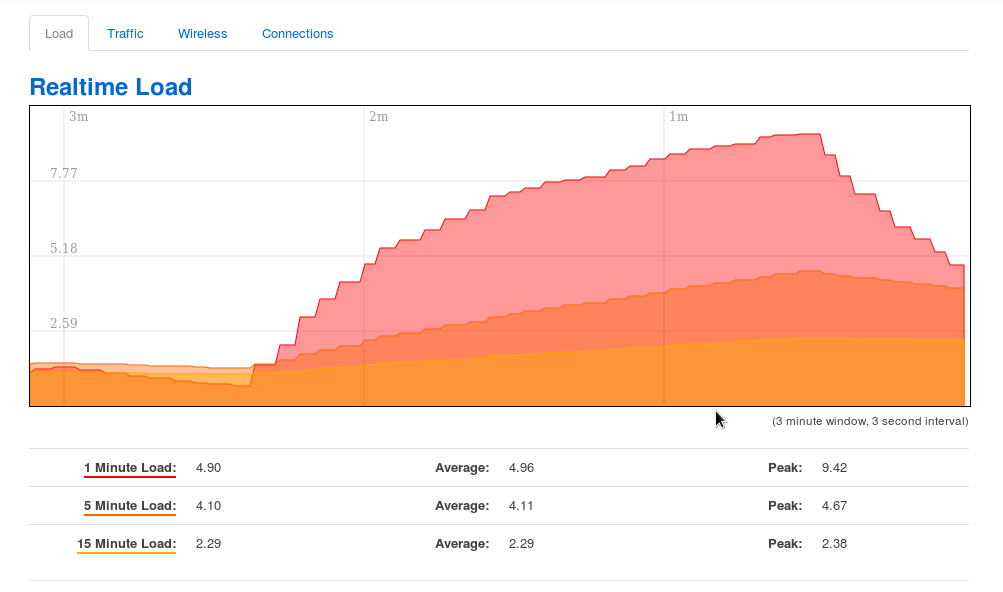 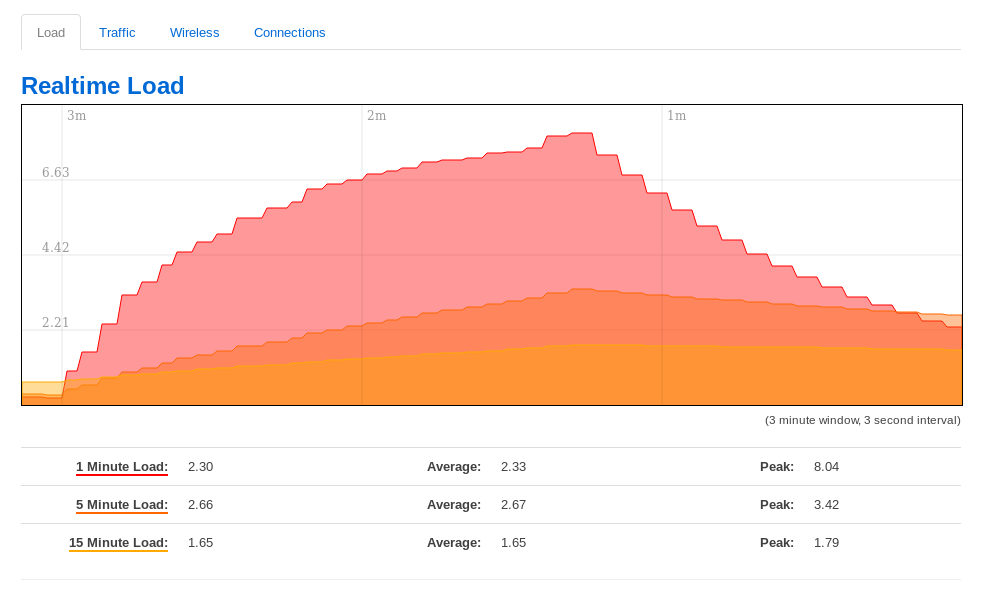 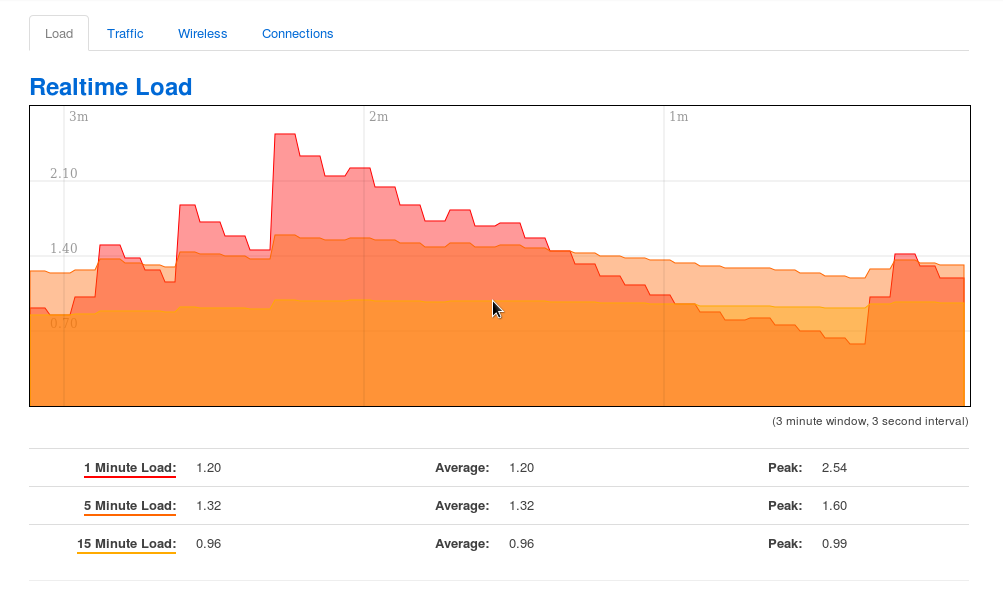 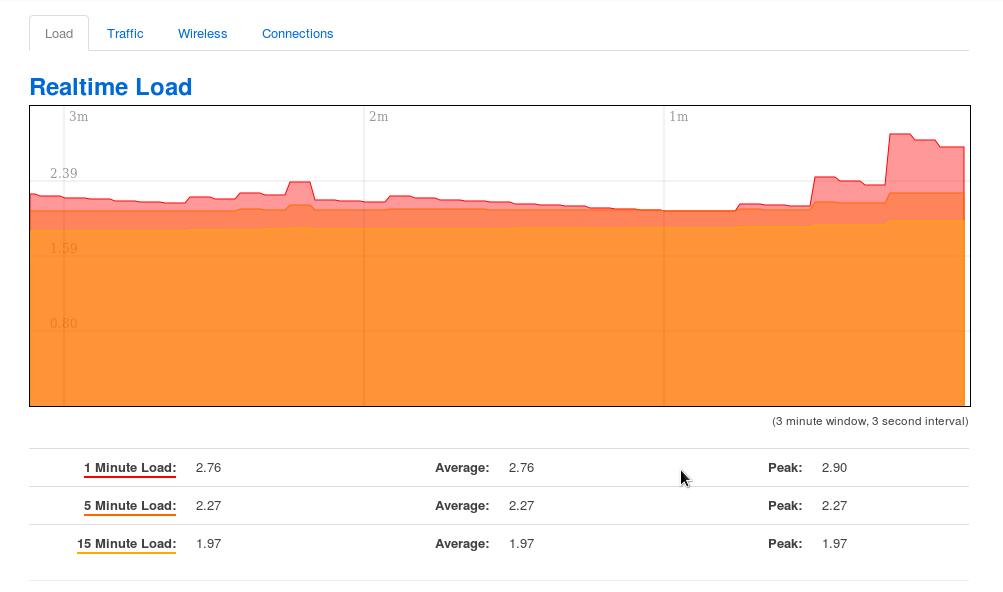 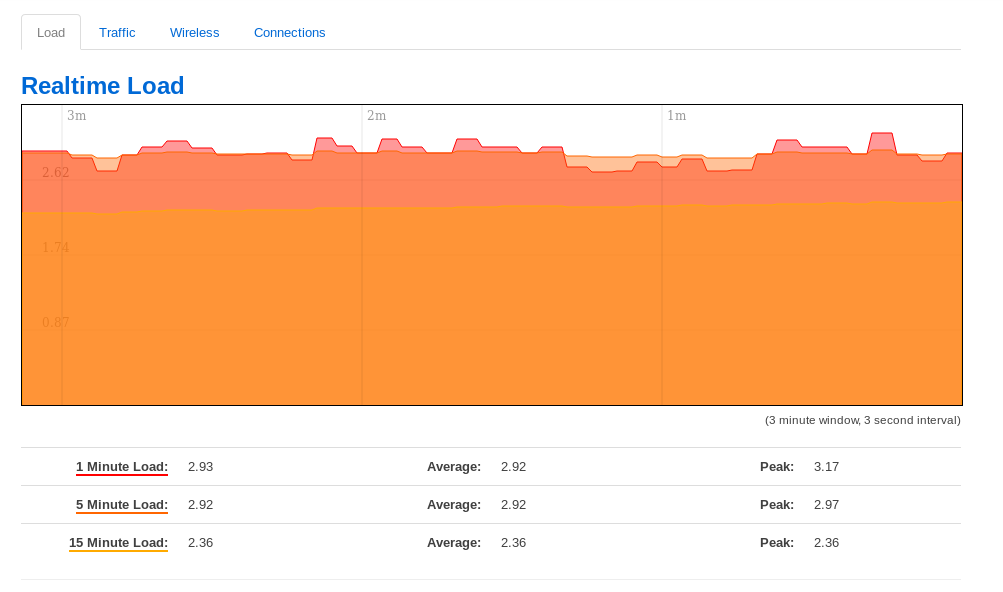 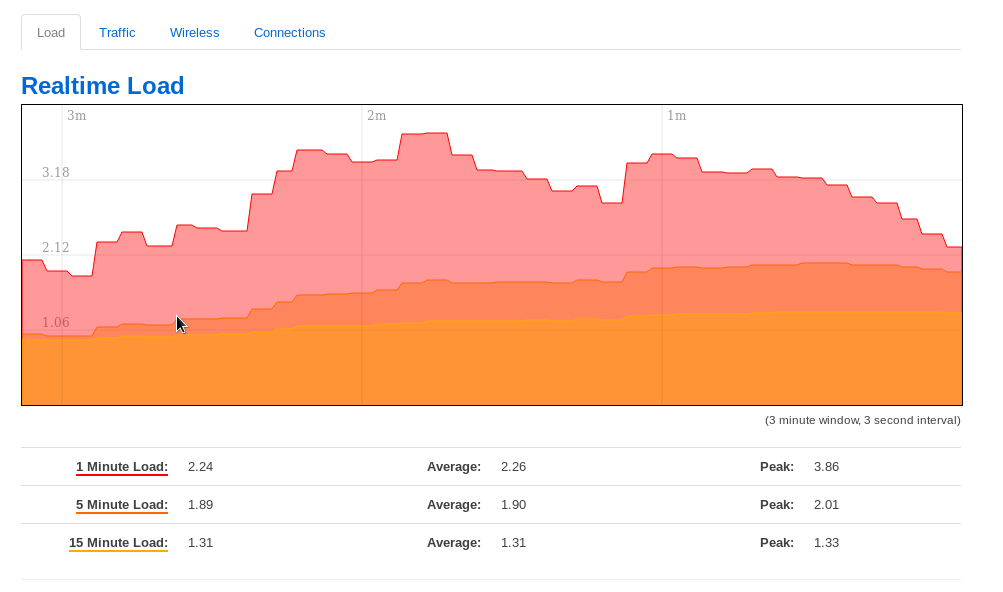 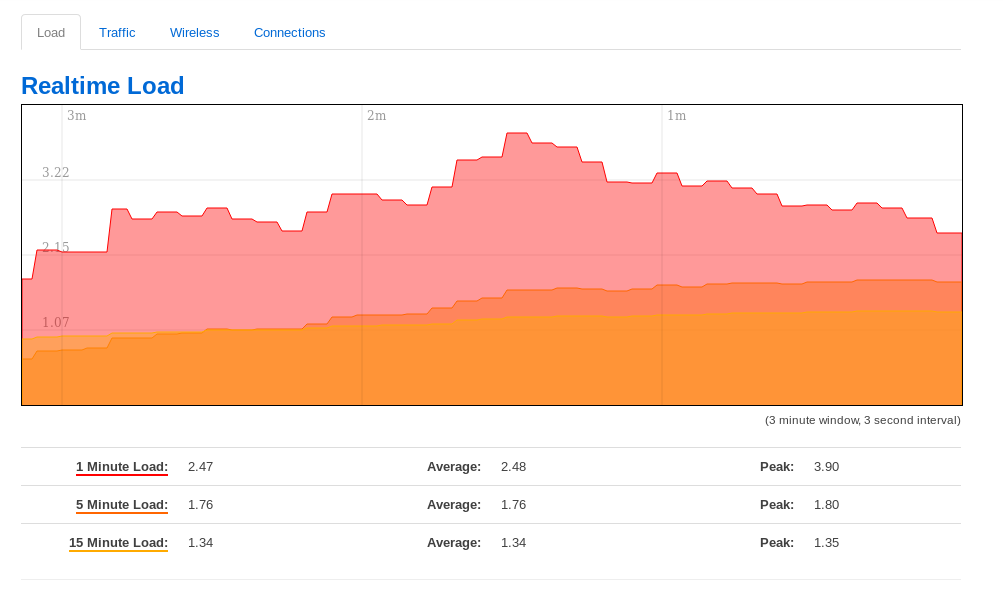 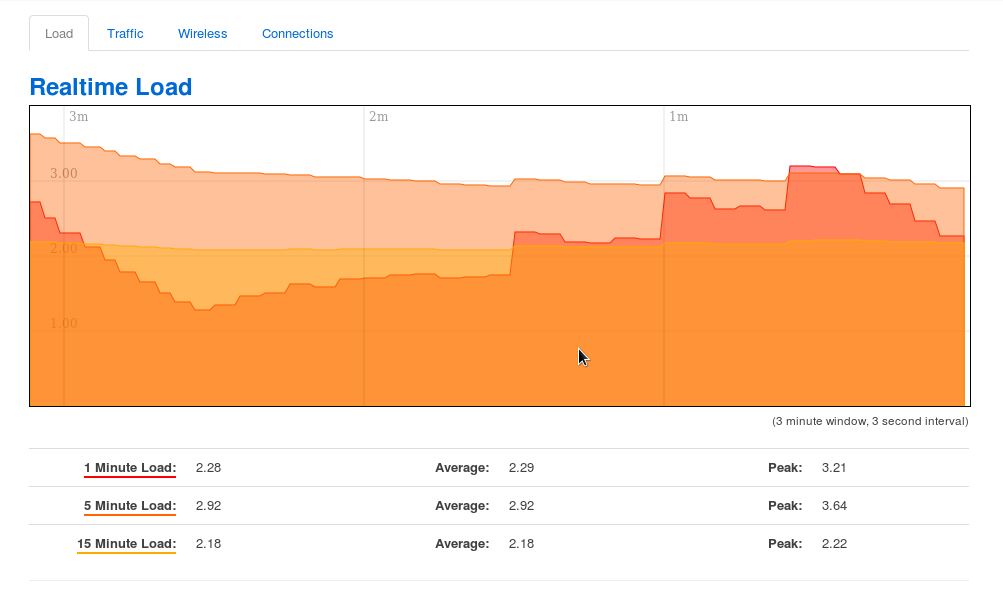 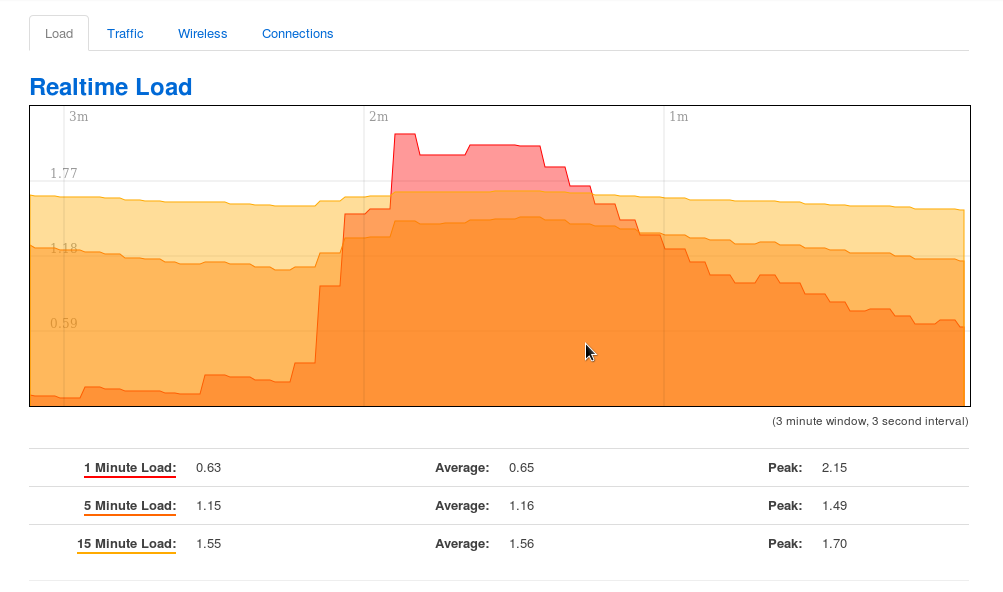 Streaming music or HD video was not an issue and worked smoothly. Given the bandwidth requirements for these (around 1.5Mbit/s or for FLAC and 12.5Mbit/s for MPEG-4 + AC-3) such a setup can easily serve multiple of these streams.

Looking at pictures was very usable in a slide show, however with higher resolution pictures there could be a noticeable lag, unless the viewer application caches images ahead of time.

Finally streaming a HD video while uploading an incremental backup also works flawlessly, though the upload bandwidth is reduced.

Performancewise we can see that the router is only capable of limited transfer speeds. Even though being on the slow side for a local network, they are still comparable with average broadband speeds (60/60 Mbit/s for up/down link respectively). This means such a setup could be still be very valuable on slower, or data capped Internet connections, or even as a self maintained cloud storage.

In async mode significant speedup was only gained during the upload of many small files. Increasing the NFS server block size to 32k improves the speeds across the board however, bringing up and download speeds practically to equal. At this point the transfer speeds seemed to reach their maximum potential.

Naturally there was some memory pressure on the router when doing large copies, but it was not the primary limiting factor. It was the rather limited the IO capabilities of the SoC in the router. This is confirmed by the CPU, RAM usage numbers. More RAM would of course mean more FS cache and thus better burst performance, but a better CPU with the same amount of memory would yield faster sustained performance. USB 2.0 ports were clearly in High Speed mode, but we were far from hitting the limits, and thus were not a limiting factor either.

Overall I found that the performance is acceptable for the average workflow outlined at the beginning of this benchmark and this setup could likely serve a few clients at the same time. Using such a setup as a large background storage complements really well the laptop that has much smaller, but very fast SSD based disk.

The only significant drawback of this solution is that we have no hope of applying block or FS level encryption to the NFS drive while maintaining network performance due to the router’s weak CPU.